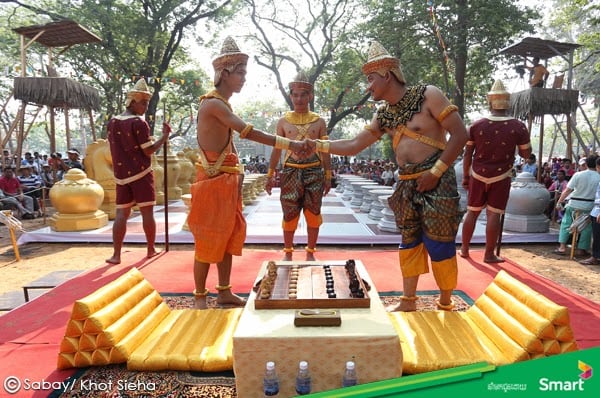 This week the streets are buzzing in Siem Reap, and the government says that more than 1 million people have flowed into Siem Reap to enjoy the Khmer New Year celebrations this year.

This year the Khmer New Year festival is held over 4 days from 13-17 April, 2016. It is also known as Angkor Songkran or Angkor Sangkran, depending on how it is translated into English.

Many traditional plays are played during Angkor Sangkran, including Ongkunhs, rope-pulling contests and more. Wherever you go around Cambodia you will see many people participating in games, especially in the countryside.

Everyone will be out on the streets wishing each other and their families success, peace and happiness. Much earlier, during Angkor times, the Khmer New Year was celebrated 4 months earlier on the 1st day of the first lunar month. This was abandoned after Angkor, as a solar calendar was adopted and gained popularity.

Four things you may wish to do if in Cambodia for Khmer New Year celebrations are:

Khmer New Year consists of three very important days. In 2016 there is one extra day too. Most people will take about a week off work during the period.

The first day of the Khmer New Year is called Moha Songkran.
On that day, a new god or angel is appointed to protect the world for the year ahead. To welcome him, people clean and decorate their houses and themselves, to make sure that the New Year does not start with bad luck or unhappiness. Each home “competes” to welcome the new god or angel individually by offering a table full of fruits, a cake with candles, incense sticks decorated with flowers, and flashing light chains to ensure that the house and the family are protected for the rest of the year.
The time around New Year is the only time when young Cambodians are allowed to meet and engage in “mixed” plays. It is also the opportunity for young men to look for potential brides. That’s the tradition!

The second day of the New Year is called Wanabat.
This day is the Day of Giving, where one gives gifts to parents, grandparents and elderly people. Children receive new clothes and poor people are given money or clothes. In the evening, the monks in the pagodas are asked to give a blessing.

The third day of the New Year is called Tanai Lieang Saka and means “new beginning”.
After seeking the blessings of the monks in the morning, a joyful farewell celebration is held in the afternoon. In the streets and in public places, people pour water on each other. Children and young people throw baby powder and flour at each other. People that usually work far away from their families in other provinces make it a point to return to their families to celebrate the New Year together.

Usually there are only three days, but this year there are four days.

Cities, specially the capital Phnom Penh, are very quiet during that time, as most people that live and work in Phnom Penh are not born there. They come from other provinces, such as Siem Reap, Battambang, Kampong Cham, Kompong Thom, Svay Rieng, and others of the 24 provinces that make up the country.

At the beginning of the festival, people usually cook food and bring it to the monks in the pagodas. The pagodas are also a good place for Cambodians to meet other people who are also born in their region or who went to school together, but now live and work in other places. The pagoda thus becomes a place of reunion, meeting old friends and exchanging news about their lives. During the festival, many traditional plays are played, such as throwing of “Ongkunhs”, rope-pulling contests, and others. After the festival, people return to their places of work and wait for the next festival, Pchum Ben Tag. That will be the next time when the whole family and friends get together again.